56. The last major battle in the Netherlands

On 16 April 1945 the 5th Canadian Armoured Division liberated the village of Otterlo. But other German soldiers, on the run to the west, occupied the village again. In the ensuing confusion the skirmishes escalated into a vicious battle, with more than 300 soldiers killed: the last battle on Dutch soil. 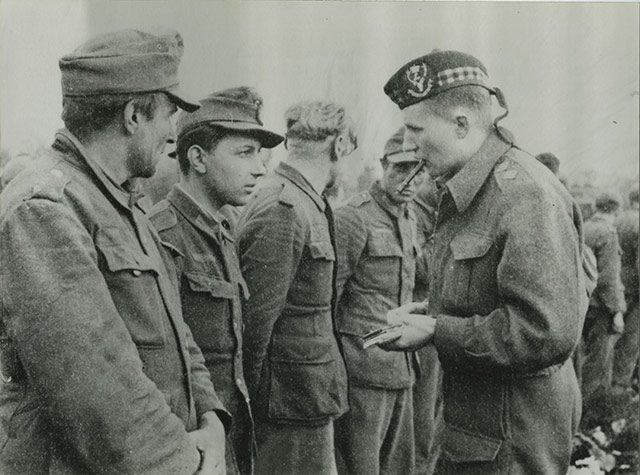 After the failure of Operation Market Garden in September 1944 the Allied forces shifted their attention to the last line of German defenses in front of the river Rhine (Westwall). The liberation of the Northern part of the Netherlands would have to wait for a while. After the breakthrough at the Rhine the Allied forces where split into three groups. One of these groups, made up of mostly Canadian forces, swung round and started the liberation from the Netherlands from the east.

On 16 April 1945 the 5th Canadian Armoured Division liberated the village of Otterlo before continuing on to Wekerom and Voorthuizen. They left the divisional headquarters and an infantry battalion behind in the village.

Meanwhile, the Germans were trying to get to safety in the west of the Netherlands. Somewhere between 600 and 900 German soldiers reached Otterlo on the evening of 16 April in the attempt. The Canadians fired their guns at short range but were eventually taken out by the German soldiers. The gunners fought on using their hand guns but groups of German soldiers managed to push through and entrenched themselves in the village.

In the early hours of the next morning, the situation had escalated into a serious battle. Canadian tanks had been called in for assistance. Two Wasp flamethrowers fired at the German positions whereupon the German soldiers panicked and fled. More than 300 of them were killed along with twelve Canadians and four civilians. 48 Canadians were wounded. The liberation of Otterlo came at a high price.