Making mistakes is human but it can sometimes have inhuman consequences. On the 22nd of February 1944, Nijmegen was hit by a veritable carpet of bombs. During bombing runs over Germany, American pilots became disorientated and mistook the city for the German town of Cleves. Many lost their lives during this mistaken bombardment. Men, women and many children. 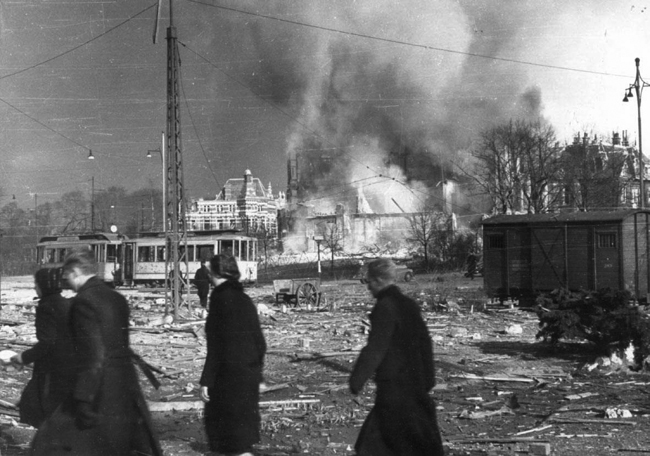 Until February 22, 1944, Nijmegen was known as the 'City of the towers'. On that date, the city centre was almost totally destroyed by American bomber aircraft mistakenly dropping their bombs above Nijmegen. They thought they were over Germany. Old photographs show the former glory of the houses in this, the oldest Dutch city. On that day, Old Nijmegen was largely reduced to rubble.

Hundreds of bodies were recovered from the ruins. In February 26 1944, thousands joined a funeral procession to the churchyard on the Graafseweg, paying their last respects to relatives, neighbours, friends and fellow-citizens. The dead were laid to rest there in mass graves, which remain to this day. Almost 800 people were killed during that mistaken bombing raid.

In the Raadhuishof (town hall court) in Nijmegen, a monument has been erected in memory of the 763 nijmegen residents who died: 'De Schommel' (the swing). The dead included 24 children and eight nuns from an infant school which formerly stood on the site of the monument.