The Channel Islands were the only British territory to be occupied by German forces during WWII. Islanders lived under German rule for five years. May 12 was a day of celebrations. Liberating task force Commander, Brigadier Snow, raised the Union Flag and read an official Liberation Proclamation to the cheering crowds gathered at Elizabeth College. 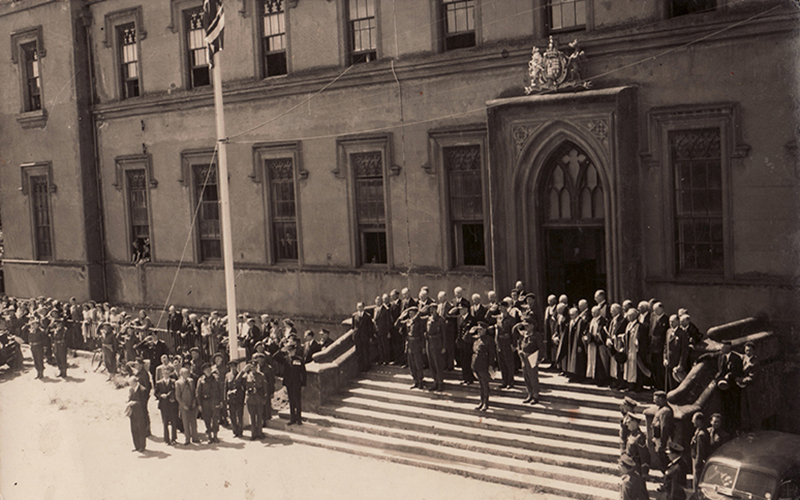 British Prime Minister, Winston Churchill, made the difficult decision not to defend the Channel Islands and they were subsequently occupied by German forces in June 1940, remaining so until the end of WWII.

Following two years of occupation, in 1942 Hitler ordered the immediate deportation of any non-islands-born men between the age of 16-70 and their dependants. The first deportees of the Islands of Guernsey were sent to Biberach in Germany, via a transit camp in Dorsten. Many deportees did not make it back to the Islands until long after the war had ended and, sadly, some never made it home at all.

Remaining Islanders faced three more years of life under German rule. Children continued to attend school - German lessons were compulsory and classes were taught in the presence of a German solder.

“Our schooling was interrupted many times as the Germans would suddenly take over school buildings for stores. I went to school in at least seven different buildings…” Extract from the notes of Tom Jehan

Elizabeth College has served as a school for many years. As well as a site of education, it played a significant role in Guernsey’s liberation celebrations.

Brigadier Snow, Commanding Officer of the Allied liberating task force, various dignitaries and the band of the Duke of Cornwall's Light Infantry (DCLI) paraded through St Peter Port, heading to Elizabeth College on the 12 May. Followed by cheering civilians, some 2,500 people witnessed the raising of the Union Flag and listened to an official address, read out by Brigadier Snow.