It goes without saying that during a war, bridges are strategically important. But what if there are no bridges anymore? In February and March 1945, the British Royal Engineers constructed a 1-kilometre long Bailey bridge between Oeffelt and Gennep. A magnificent technical achievement, acknowledged by the visits of Churchill and Montgomery. 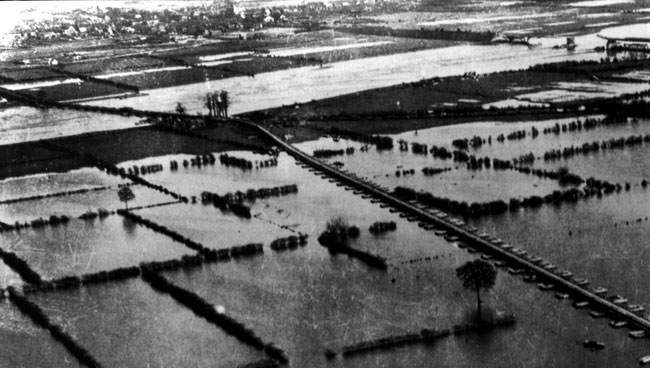 The restaurant on the Brabant side of the river Maas is the Oeffelt Ferry House (Veerhuis Oeffelt). For centuries, people and livestock were carried over the river by the ferryman here. In mid-1944, the area around the Ferry House had been liberated, but the Limburg side of the Maas was German-occupied territory.

Every evening, the British troops withdrew to the village of Oeffelt. German soldiers and their prisoners dug trenches in the fields along their side of the Maas. At some point, their enemies would attempt the river crossing. This situation, with the river as physical separation between the British on the Brabant bank and the Germans on the Limburg side, lasted until February 1945. Then the Allies decided to advance. The Royal Engineers moved forward, to construct a Bailey Bridge over the Maas.

Thanks to this Bailey Bridge, Montgomery was able to cross the Rhine a few weeks later, in late 1945, with the aim of taking the Ruhr area. The bridge at Gennep remained in use until well after the Second World War, when a permanent bridge could be built. www.liberationroute.nl